Background -- National Laser Scanning data are becoming more and more available, which allowing the creation of
new National Forest Inventory data with significantly higher accuracy. Terrestrial laser scanning (TLS) has been recently
shown to be a promising technique for forest-related studies. Many tree attributes have been correlated with
measurements from TLS data, and the accuracy of tree-attribute estimates is similar to, or even better than, national
allometric models. TLS is anticipated to be a practical method for the future forest mapping and the data source for
National Forest Inventories (NFIs).
International benchmarking -- EuroSDR launched in 2014 the benchmarking on TLS methods for forestry
applications in order to understand the optimum data processing technique for future automated plot inventories.
National mapping agencies, companies and research organizations are all welcomed to carry out the following
experiment and to provide the extracted plotwise parameters, such as the tree position, DBH, diameters along tree
stems and DTM. The emphasis in this benchmarking is on existing and modified algorithms, or manual measurements
from TLS data. Meanwhile, this project is also open for all techniques in the research phase. FGI is responsible for the
general conduct of the project, collecting all field data and conducting evaluating the results. An EuroSDR report will be
published after the benchmarking and joint peer-reviewed journal articles by the participants on the statistical
comparison results will also be prepared.
Objective – The objective of the TLS methods project is to evaluate the quality, accuracy, and feasibility of automatic,
semi-automatic or manual tree extraction methods based on high-density TLS data. The sub-objectives include
Test site and TLS data – The test forest is a southern Boreal Forest in Finland. 24 sample plots, 32-by-32m each,
have been measured in the summer 2014. These forest plots have varying species, growth stages and management
activities, and included both homogenous and less-managed forests. TLS data were collected using both single- and
multi-scan approach and are in a point cloud format, i.e. XYZ and intensity. One scan was made at the plot center in the
single-scan approach. Five scans were made at the plot center and NE, SE, SW and NW directions, and one merged
scan has been prepared for every plot.
Data permissions –The TLS and reference data have been collected for the purpose of this test and is owned by the FGI.
The data will be in free use after the test.
Timetable – The experimental data set will be distributed at FGI ftp-site in February, 2015. The dead-line for the
submission of the extraction results is by the end of July 2015. The evaluation of the results of carried out and by the
Feb 2016, and then the project will be reported. There will be joint refereed papers written by the participants.
Xinlian Liang and Juha Hyyppä
Finnish Geodetic Institute
Centre of Excellence in Laser Scanning Research, www.fgi.fi/coelasr
xinlian.liang@fgi.fi, juha.hyyppa@fgi.fi 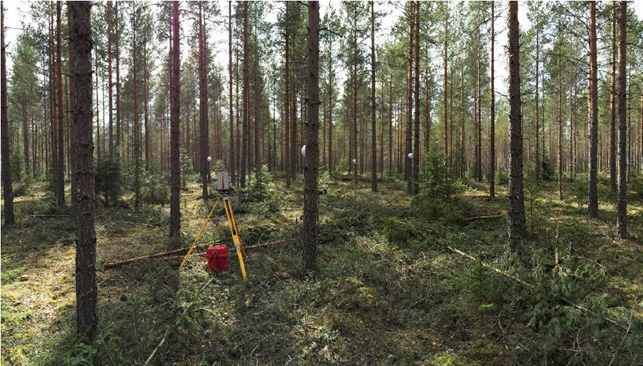 Newsletter March 20th 2015
The international benchmarking of terrestrial laser scanning methods for forestry applications progressed as planned. The test datasets were released in Feb. 2015. More than 10 international groups have downloaded the test data and more are encouraged to join. The test data can be obtained from the ftp site of the FGI, after sending a request to xinlian.liang@nls.fi or harri.kaartinen@nls.fi. This international benchmarking on TLS for forestry applications is targeting on the existing and modified algorithms, or manual measurements from the point cloud data. Meanwhile, the project is also open for all techniques that are in the research phase. National mapping agencies, companies, universities and research organizations are all welcomed to participate in the project and to provide the extracted plotwise parameters. In addition to the final report (in the middle of 2016), joint peer-reviewed journal articles on the statistical comparison results will be prepared. All participants will be invited as co-authors/co-writers in all papers.
The distributed data includes one single-scan and one multi-scan dataset for each of the 24 plots. Figures 1 and 2 show examples of the TLS data. Reference data is provided for one plot as an example of expected results, which can also be used as training data. The TLS data are exclusively used for this project before the publication of the final project report. After that, the point cloud data will be free of use for non-commercial purposes. The results of the test and report from participants are requested by July 31st 2015.
Figure 1. Single-scan TLS data of a test plot in 2D (left) and 3D (right)
Figure 2. Multi-scan TLS data of a test plot in 2D (left) and 3D (right)